Bumping up. We (our band) are on the cover of the local “newspaper” in Carlsbad

Posted on April 1, 2016 by coveyouthband

There is a historical paper in the city of Carlsbad with neat old stories from newspapers over the past 100 years. The Cove Youth Band was right on the cover!

I will continue to monitor this site for Cove Youth Band alumni ….

In the meantime I will add other content namely some of the efforts I am involved in in the craft of brass repair and refinishing. 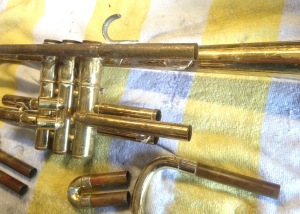 A filled in old pool

Well anyone that went to Cove Youth Band in the heydays would remember. This is Mr. Bader’s old pool, in back of where his house was on Cherry Street in Carlsbad down by the beach. Many good memories were made swimming here. BBQs and lots of fun!

Cove Youth Band was a youth band, music school, marching band, and local talent venue in the City of Carlsbad Ca. during the later 1950s into the 1960s.

Located in the space near the railroad tracks in Carlsbad now used as “The Alley” bar, many young people spent hours practicing various instruments in little cubby hole rooms lining the perimeter of the large band room, most no bigger than a hall closet.Each room had a “peep hole” for Mr. Bader to come around and check progress, inspire, cajole and otherwise keep the learning process going.

This blog is being started to share memories, perhaps connect with others who shared this experience or remembers events surrounding that era, or had family members in the band.

Many kids learned under the watchful eyes of the director/teacher/band leader Mr. Lloyd Bader and his wife. I recall we played talent shows, at every Elks Club, Moose Lodge, Optimist Club, Odd Fellows, and the odd Grange Hall. (this is the Vista Grange )

We even played for the birthday of the Oceanside post office.

Hoping to collect stories and photos here and have some fun!